The Story of Winston – a White-Nose Syndrome Survivor 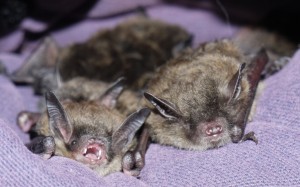 In January 2009, Winston, a Little Brown bat, was rescued from Rockaway Township, NJ. He was found outside a shopping mall lying on the concrete. It was a frigid night, only 10 degrees outside. He was suffering from severe dehydration, starvation and frostbite, and very close to death.

You see, Winston was hibernating in Hibernia Mine, just a few miles from the mall. He was one of the 30,000 bats that called Hibernia Mine home every winter. But this winter was different. This winter, a deadly fungus had invaded Winston’s home. But he was unaware of the danger because he was in a deep sleep with his friends. They were hibernating like they did each year until spring, when they would awaken and fly off to their summer roosts.

But this year a cotton-like fungus started to cover the bats, growing on their wings and ears. This fungus loved the cold, damp environment that the abandoned mine provided. As Winston and his friends slept, the fungus started penetrating into their wings.

After several weeks, Winston awoke from the pain the fungus was causing. He started flying all over, confused. And thinking it was summer, he flew out of the mine. Before he realized what was happening, he had flown a few miles from the mine. But he was so hungry and cold that he couldn’t make it back. So he fell to the ground at the mall.

A man going shopping saw the little bat lying on the ground and picked it up. He wasn’t even sure if it was alive, but he put it in a container and called our sanctuary. This man was very kind. He changed his plans and drove 35 miles to bring the dying bat to the bat sanctuary.

First on our list to save Winston was to warm him up. Then we rehydrated him with electrolytes. He was reintroduced to food very slowly and in small amounts. This allowed his body to get used to metabolizing food because he hadn’t eaten in several months.

We soon realized that the damage to his wings from frostbite was severe. He chewed parts of his wings and finger bones off in a desperate attempt to rid himself of the pain. So we gave him pain medicine and antibiotics to ward off any infection.

But Winston was feisty! He began to heal and regenerate portions of his wings. And he ate and ate and ate! When he was totally healed and off his medicine, he was placed in a community of other Little Brown White-Nose survivors. For many years Winston and his friends could be found hanging out in one of their pouches or hiding under one of the pieces of “bat furniture” in their indoor flight enclosure.
Oh, and did I mention that he loves to eat?!!!!

(Sadly, as of January 2019, only 300 bats could be found hibernating in Hibernia Mine)